Ah… Savannah.  This gorgeous southern town is ghost walk nirvana, and this walk meanders through some of the city’s stateliest squares.  Disclaimers: the addresses listed below are privately owned so you can’t just go running in to do a ghost hunt.  This tour was designed as a daytime walking tour to view the exteriors, and hopefully have an enjoyable walk with some good ghost stories along the way.

Story: This stately home was designed and built by Isaiah Davenport in 1820.

Manifestation: The ghost of a young girl with blond curls has been spotted in the attic, gazing down from the top left window, and a ghost cat has been reported by visitors to the museum, twining about their legs and disappearing inside. 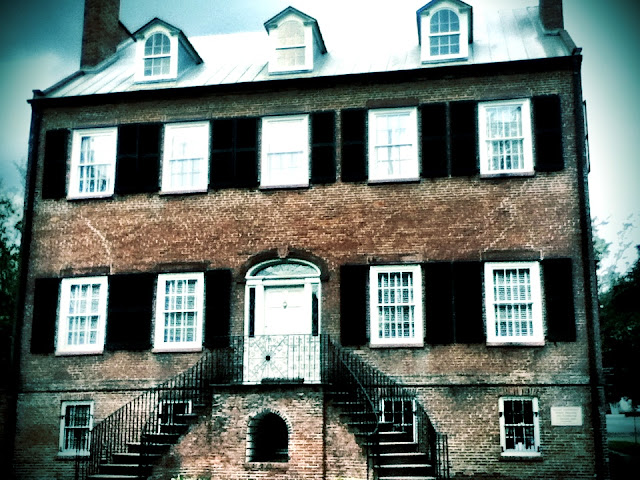 Kitty corner from the Davenport House, on Habersham Street, is the Kehoe House.

Story: Originally built in 1892 as a private residence for steel magnate William Kehoe, the house became a funeral home in the 20th century. According to legend, the twin children of the Kehoes died playing in one of the fireplaces, and this may account for why the chimneys have been blocked up and decorated with angels.

Manifestation: Legend has it that a lady in gray haunts room 203 of this bed-and-breakfast. The sound of children’s feet running up and down the hallways. An employee reported the front doorbell ringing repeatedly and then opening of its own accord, though no one was there. 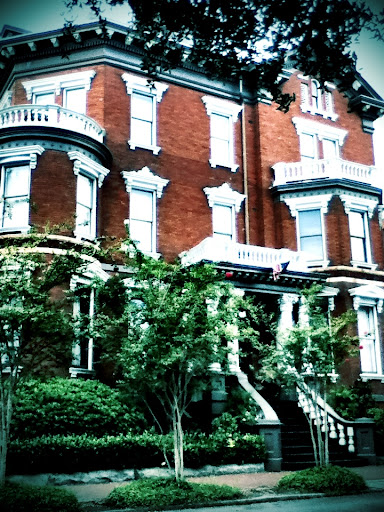 Continue down Habersham and make a right on E. President Street.

Story: This inn is the oldest in Savannah, built in 1820. It is reputed to be haunted by a young woman named Anne, who fell from to her death from room 204. There are several legends attached to her. One says she was betrothed to the original owner of the home, Steele White, but fell in love with and became pregnant by a German sailor. When he abandoned her, she killed herself. Another story about Anna says she was a flirtatious servant, who was similarly loved and abandoned after becoming pregnant. A third version says she was locked in the room by her jealous husband, and threw herself out the window as she watched her lover’s ship sail off into the horizon. This story is the least likely as Steele White died before construction was completed on the house.

I spent the night here and… no ghost.  But it’s a charming inn.

Manifestation: Male guests in room 204 have reported awakening to an invisible woman’s caress. Female visitors have reported having their personal items moved about. The angry ghost of an African-American servant has been reported harassing female workers in the basement kitchen, pulling their hair and jangling her bracelets at them. 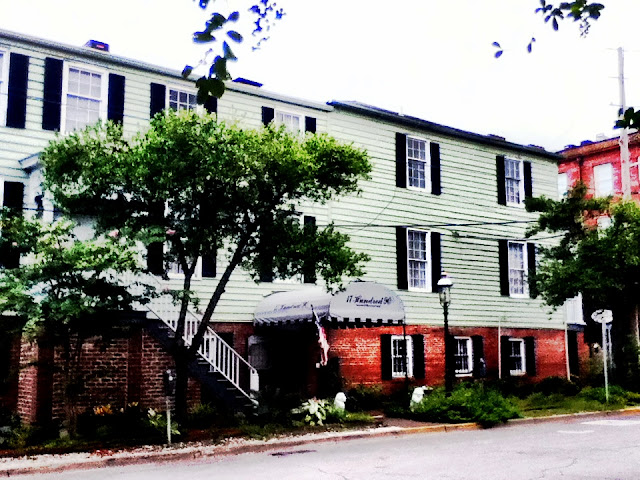 Turn left on Lincoln and continue into the cemetery.

Story: This atmospheric cemetery was opened in 1750 and enlarged in 1789. It is the final resting place of prominent Savannah citizens, dueling victims, and 700 victims of the yellow fever epidemic of 1820. It’s little wonder that the cemetery is believed to be haunted. It’s most famous specter is that of Rene Asche Rondolier (or Renee Rondolia Asch), a disfigured orphan who lived in the cemetery in the early 1800s. He was accused of the murder of two girls whose bodies were found in the cemetery, dragged to the nearby swamps, lynched and left for dead. But in the days that followed, more dead bodies turned up in the cemetery. The people of Savannah were convinced Rene’s ghost was the culprit, and to this day the cemetery is known by some as Rene’s playground. It’s said his ghost roams the grounds at night. Recently, caretakers found evidence of animal sacrifices in the cemetery, and so it is now locked at night.

Manifestation: The apparition of a man who vanishes in the cemetery. 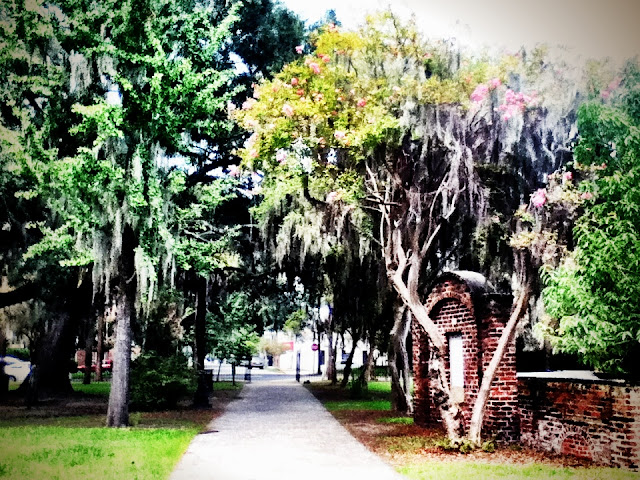 Exit the cemetery and walk down Abercorn. The street splits at the square – take the left hand road to 330 Abercorn.

Story: If this French Gothic mansion looks familiar to you, you may not be experiencing déjà vu. It was the inspiration for Walt Disney’s Haunted Mansion at Disney World. Built in 1873, this was the first Savannah mansion with electric power. The second owner of the home, Dr. Francis Turner, was rumored to perform autopsies on the bottom floor, where he met his patients. But the Turners were also known for hosting lavish parties. Their children were banished upstairs during the parties, where they would play with the balls on the billiard table. Not content with this arrangement, one night the children “accidentally” rolled billiard balls down the stairs so they could retrieve them and catch a glimpse of what the adults were up to. But one of the little girls got too close to the top step, and fell down the stairs to her death.

Manifestation: The ghost of Samuel P. Hamilton is believed to wander the mansion’s second floor. The sound of something being rolled down the stairs and pool be played upstairs has been reported. 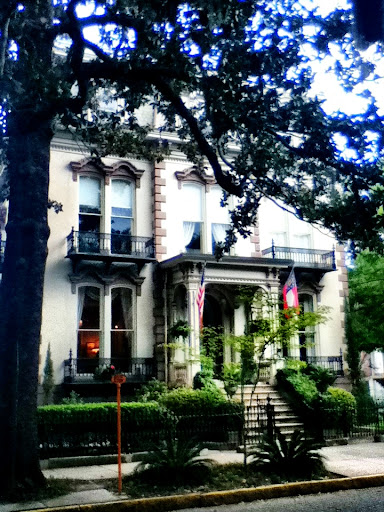 Continue down Abercorn Street and again jag left as you go around the next square to 432 Abercorn.

Story: According to legend, in the 1800s, an Army General named Wilson lived in this home with his nine year old daughter. He forbid his daughter from playing with the children in the school across from her home. The temptation proved too great for the girl, and one day she ran disobeyed. Furious, the father tied her to a chair in her second floor bedroom and left her there for two days, during the brutal Savannah summer. She died of heatstroke, tied to the chair. Distraught, the father blamed the children at the school for tempting his daughter, and would sit in her chair in that second floor room, glaring at the school children playing. He died there as well.

Manifestation: People have reported being pushed, and hearing a disembodied voice telling them to get out. The face of the General has been photographed on the wall outside his house, to the left of a window on the first floor. 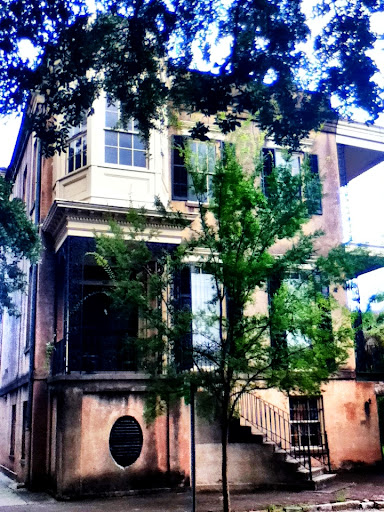 Walk left on E. Gordon to the next square.

The Mercer House is on Bull Street.

Story: Made famous by the book, “Midnight in the Garden of Good and Evil,” by John Berendt. Once owned by musician Johnny Mercer, the home was purchased by Jim Williams, a local antiques dealer. Known for hosting lavish parties, Williams was tried for four times for the murder of a local prostitute, Danny Hansford, who was shot on the grounds. 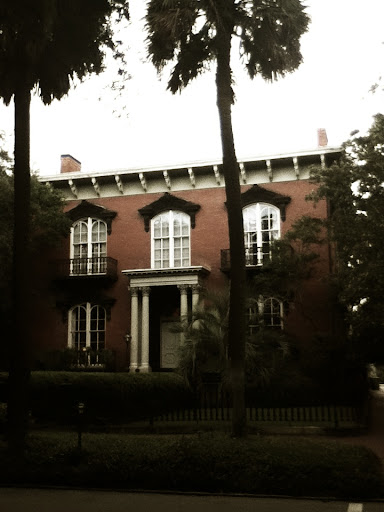 Go up Bull Street to East Jones and turn left.

Story: James Thompson survived the Civil War, and then was kicked by a horse outside his beloved house and killed. His ghost is now believed to haunt the house, and has been reported sitting on the couch and looking out the window of room 132 of this historic inn. Strangely, most of the apparitions have only been “partial body” – the specter typically appears only from the waist up. But James Thompson isn’t the only ghost to haunt room 132. Guests have reported encounters with a small girl, who shakes them, asking them to get up and play.

Manifestation: The laughter of a young girl, the apparition of James Thompson. Most of the activity is focused around room 132. 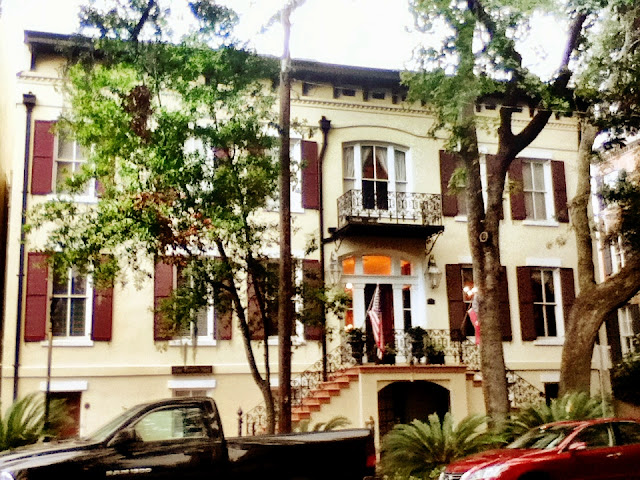 Retrace your steps to Bull Street and continue up it to #245.

Story: Though the building dates from 1910, the Six Pence Pub was constructed on a much older foundation, which may account for the hauntings. Pots and pans in the kitchen have been known to move of their own accord, sometimes spinning like tops. And staff have reported numerous ghostly encounters. On one memorable morning, the staff arrived to find the windows frosted over. When they entered, the thermostats had been tampered with, turned to sixty degrees on one level and eighty on the other. All the downstairs light bulbs had been removed and stacked upon the floor.

Manifestation: A pinball machine that plays by itself, chills, and objects that move of their own accord. 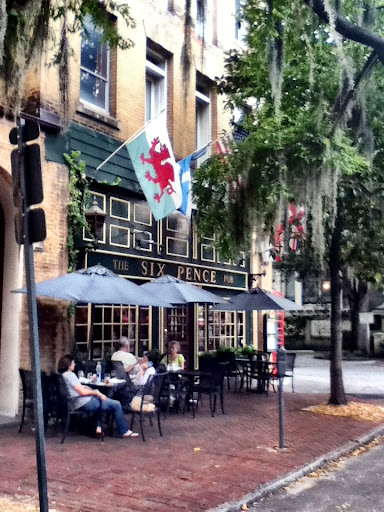 Continue up Bull Street to E. Ogelthorpe Avenue.  The Juliette Gordon Lowe building is on the corner of Bull and E. Ogelthorpe.

Story: The parents of Juliette Gordon Lowe, founder of the Girl Scouts, were a true love match, and when Willie Gordon preceded his spunky wife, Nelly, to the grave, he decided to wait for her. Nelly was on her death bed with her son, Arthur, at her side, and Arthur’s wife, Margaret, waited outside in the hall. She was shocked to see Willie Gordon walk out of Nelly’s bedroom, his face suffused with joy. Shortly afterward, Arthur emerged from the room and told his wife that his mother had passed away. Margaret told him what she’d seen, but he didn’t believe her… until the butler told him he’d just seen Willie walk out the front door in his best gray suit. Willie had come to escort his wife.

Manifestation: Nelly’s ghost has been reported in the center hall and at the dining room table, the sound of the pianoforte playing, mysterious footsteps, and objects moved about. 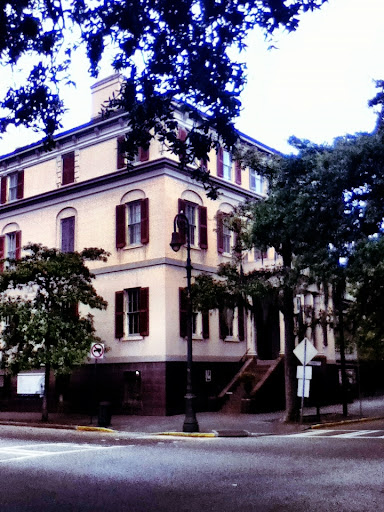 Go right on E. Ogelthorpe and take a left on Abercorn.

Story: This popular tavern is said to be haunted by its builder, Gen. James Habersham, who appears in the restaurant. Our waiter told us a prior owner’s jealous wife has been known to lock women in the ladies room at the lower tavern level. It happened so often, they had to remove the locks. Three weeks before we arrived, a psychic told them that the spirits of three slaves haunted the wine cellar (once an old bank vault). An unusual orb was also caught in the lower hall leading into the tavern on one of the hotel’s security cameras.

And the food is amazing. You may want to time this for dinner. One of the floors requires reservations, but the tavern level (which is, in my opinion, most interesting) is first come, first serve.

Construction on the Olde Pink House began in 1771 by the Habersham family, and it saw Savannah’s occupation by the British during the Revolutionary War and by the Union Army during the Civil War, and the great Savannah Fire.

Manifestation: Colonel Habersham has been seen wearing Colonial garb and drinking ale. His ghost has also been blamed for lighting candles in the house. A female ghost on the second floor has also been reported, as well as slave children who play dice in the center and play tricks on the guests.