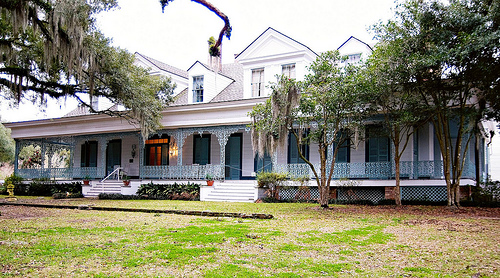 Today we have some more haunted research from paranormal mystery author Catie Rhodes.

The topic is paranormal.  Today is a little different, though.   We’re going to talk about a few ghostly tales that can be disproven using historical fact.   Our destination: the most haunted house in America.

Louisiana is full of mystique.  From the romance of New Orleans to the shadowy old plantations, Louisiana has ghost stories galore.

A hundred miles north of New Orleans is the The Myrtles Plantation.  This plantation is known as the most haunted house in America.  It is a bed and breakfast and is open for daily tours.

The Myrtles Plantation dates back to the late 1790s.  The original structure–around which the existing structure stands–was built by General David Bradford.  Bradford named the estate Laurel Grove.  It sat on 600 acres.

[Fun Historical Fact: General Bradford moved from Pennsylvania to Louisiana because he was sought by authorities for his association with the Whiskey Rebellion. Read more about that here.  Bradford was later pardoned.]

General Bradford taught law at his home.  His daughter Sarah Mathilda married Clark Woodruff, who was one of General Bradford’s law students.  They had three children–Cornelia, James and Octavia.

[Note: The Myrtles has had many owners over the years.  For the purposes of this blog post, I won’t do a full history.  I’ll just cover what’s necessary.  If you’re interested in doing your own research, visit my sources at the bottom of this page.]

By the 1950s, the 600 acre plantation had been sectioned off and sold.  The house itself was owned by an Oklahoma widow named Marjorie Munson.  She noticed some odd goings on and began her own paranormal investigation.

In her research, Mrs. Munson spoke to relatives of the house’s previous owners.  She was told a story about the family seeing a ghost who wore a green turban.  This story became the genesis for the most popular ghost story associated with the Myrtles.

Chloe and the Oleander

The story concerns a house slave named Chloe.  She was owned by Clark Woodruff and his wife Sarah Mathilda.  Clark Woodruff and Chloe had an affair.  He tired of her, and she worried she’d be sent to work the fields.  She eavesdropped on Woodruff’s conversations.  He caught her and cut off her ear as a lesson–which is why she wore a green turban.

To get her revenge, Chloe poisoned the Woodruff family with food made from oleander leaves.  Sarah Mathilda and her two daughters ate the tainted food and died.  Other slaves, concerned about being punished for Chloe’s wrongdoing, hanged her.

This story should already be ringing some bells.  Sarah Mathilda and two of her children did die in the home.  However,  one of those children was a boy.  Furthermore, Sarah and her children died of yellow fever–not oleander poisoning.  Additionally, researchers have been unable to find records of the Woodruff family ever owning a slave named Chloe or Cleo.

A mirror in The Myrtles is supposedly haunted by the spirits of Sarah and the two children who were poisoned.  People report seeing handprints in the mirror’s surface.

Murder at The Myrtles

It is said that at least ten murders have taken place at The Myrtles Plantation.  History only documents one murder taking place at the plantation.

In 1834, Ruffin Gray Sterling purchased the plantation known as the Laurels.  Sterling remodeled the house, adding the gallery–or porch–that stretches across the house’s front.  He renamed the estate The Myrtles.

By 1865, William Drew Winter–a son-in-law of Ruffin Sterling–began running the plantation and living in the home.  In January of 1871, a stranger approached the home on horseback.  He called to Winter, who was inside the house–to come out on the gallery.

The story of Winter’s murder has evolved to have him staggering into the house after the shooting.  In the story, he climbs seventeen steps and dies in his beloved wife’s arms.  The haunting associated with this story is that footsteps can be heard going up seventeen of the stairs…where they just stop.

Lewis Stirling–Ruffin Sterling’s eldest son–was supposedly stabbed to death in the Myrtles over a gambling debt.  Burial records, however, show he died of yellow fever.

In the 1920s a caretaker was killed in the house during a robbery.  This story is undocumented; however, a family member of one of the house’s owners was killed in a separate house on the property.

Other Legends and Associated Hauntings

Three Union soldiers broke in to ransack the house during the Civil War and were shot.  The spot where they died holds a blood stain that remains no matter what measures are taken to clean it.  The story goes on to say maids have been unable to push a broom or mop into that spot.

There is, however, no documentation of Union Soldiers ransacking the house, and family members have denied it.  If the haunting exists, perhaps its source is something else.

In the 1860s, a little girl died after being treated by a Voodoo practitioner.  She appears in the room where she died.  People have reported her trying to practice Voodoo on them.  This anecdote comes from the book The Myrtles by Francis Kermeen.  It has not been backed up by historical fact.

Is the Myrtles really haunted?

Despite the stories I’ve talked about here, my guess is yes.  Many people have seen unexplainable things there.  It’s a very old place.  A lot of people died very tragically and in great sadness within those walls.  Some of the energy probably lingers on.

Here’s a video from overnight guests who weren’t alone:

(the fun starts about 18 seconds into the video)

If you enjoyed this article, you might enjoy Catie’s fiction. Please take a moment to check it out either on her Looking For More? page or on her Amazon Author Page. Catie writes both horror and paranormal mystery fiction.

If the content of this post interests you, I invite you to peruse some of the resources I used:

Legends, Lore and Lies of the Myrtles Plantation by Troy Taylor and David Wisehart

WikiPedia’s article on The Myrtles

“Haunted Plantation” by Joe Nickell, Skeptical Inquirer, September/October 2003 (This was available for free online via my local library)

The Myrtles Plantation: The True Story of America’s Most Haunted House by Frances Kermeen